Time for another journey unearthing more lost and forgotten recordings for the Unlocking Our Sound Heritage project. This week we’re very excited to be digging through the tape archive of the Inner London Education Authority.

A progressive institution running from 1965 to 1990, the ILEA audio collection includes educational tapes for study and debate in class, short dramatic works, impressive school concert recordings and even a seven-part series for Capital Radio in which a team of plucky youngsters take the great and good of 1977 to task on the issues of the day. More on all those things, hopefully, in due course. But for today our business is with ‘It’s a Gift: A taped project for pupils’ brought to your ears by one Alan Vincent. An unassuming cassette wrapped in a yellow cover featuring a simple line drawing of a hand, upraised in the traditional gesture of benefaction – either that or it means ‘give me a biscuit’. 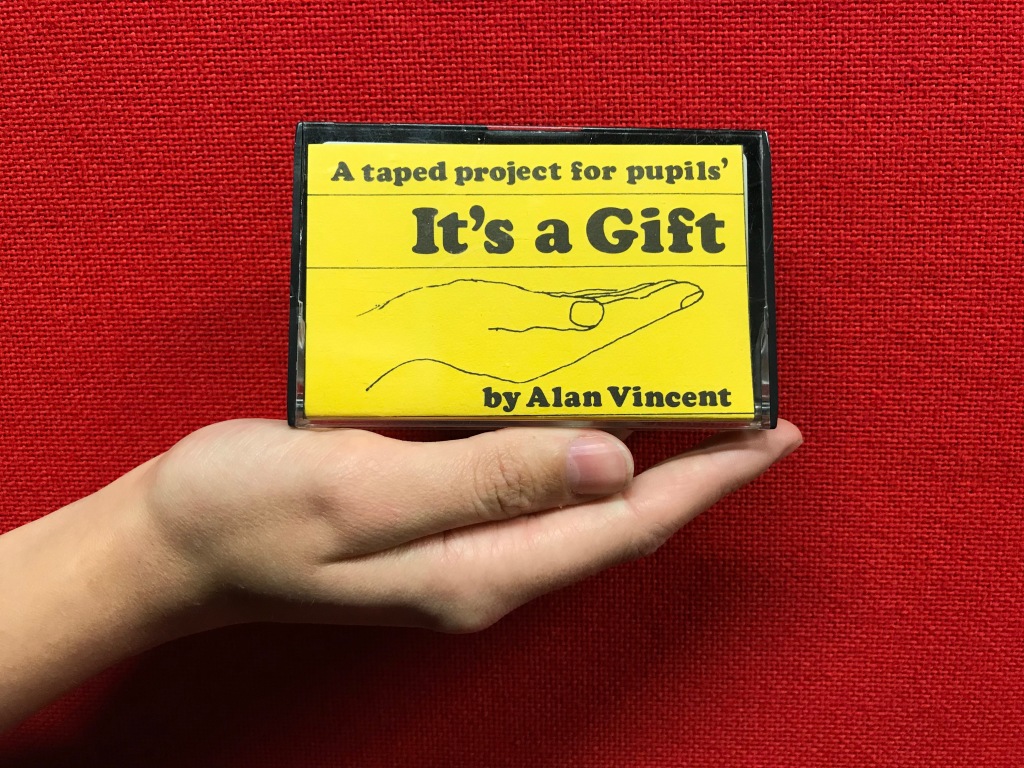 Over jaunty piano, our narrator, presumably Alan himself, sets the scene: a group of schoolfriends discover that their teacher Mr. Sharp will soon be celebrating his birthday. A popular educator, they decide that this would be an admirable time to get him a present, particularly as they will shortly be moving on to secondary school. But what kind of present should it be? The opening scene eavesdrops on our group using this very question to kick off the first in a series of spirited debates. If listening to a group of 10-year-olds take an absolute age to reach any kind of decision is your idea of time well spent, then brace yourself as we’re about to hit the mother-lode.

So, a gift. An initial proposal to get him a notebook is met with a swift rebuttal, which is probably a good thing as this would hardly have made for an interesting story. It’s an unpopular choice for two reasons: one girl sadly reminisces of how she had presented him with a notebook in the past ‘and he gave it to another person to write something down in the book’. None of her classmates seem to feel the need to point out that ‘writing things down’ is pretty much the reason that notebooks were invented, but the objection is allowed to stand. The second, more pertinent observation is that Mr. Sharp is already in possession of ‘millions’ of notebooks, the thought of which suddenly makes that particular story really quite interesting again.

But let’s put any questions raised by the subject of Mr. Sharp’s stationary surplus to one side and dream a little bigger, shall we? The suggestion of an LP of brass music is also met with disdain by the majority, for while they all agree that ‘Mr. Sharp loves brass’, it was a fact that he probably had ‘most’ of the brass records already. MOST of them, kids?! That’s a lot of brass! What exactly is going on round at Mr. Sharp’s house? And can’t you think of anything to give your teacher that he isn’t currently stockpiling?

But the suggestion of music does at least provide a jolt of inspiration for Andy, the loudest member of the group and therefore its de facto leader. The perfect present for Mr. Sharp, one that nobody else would EVER think of and that would sit most amicably alongside his mountainous horde of moleskins and marching bands would surely be ‘A PIECE OF MUSIC FROM OUR OWN MINDS!’

You need to hear it in the context of the recording, of course, but to our ears this declaration of Andy’s does possess an unusually weighted, perhaps even slightly sinister resonance. Perhaps you’ll agree that the phrase ‘a piece of music from our own minds’ sounds not a little incongruous coming from the mouth of a 10 year old – as opposed to something more conventional like ‘why don’t we play him a song’, ‘let’s just sing something’, or ‘I can’t be bothered, what’s on the telly?’. And our concerns turn out to be well-placed, for we’re about to witness a group of primary-aged children celebrating the birthday of their teacher by composing THE STRANGEST SONG EVER WRITTEN.

Via the magic of no-editing-at-all, we’re granted lengthy access to the creative process. The next debate concerns just what style of music they should be going for and you’ll be pleased to hear that this discussion carries on for quite a while too. Jazz is a good suggestion and one can readily imagine these children going full-blown Ornate Coleman and serenading their teacher with a momentous psychedelic birthday wig-out. The more formal members of the group would prefer a march, however, but what kind of march would it be (is there more than one)? Perhaps a Waltz would be better? Some Oompah? A sonnet? Light opera? Death Metal? Hurry up, kids!

But the real difficulty proves to be the lyrics – although you’ll be relieved to hear that despite this being the ’80s nobody starts rapping. It’s eventually (and I do mean eventually) agreed that they’ll each have a crack at writing some lines on the subject of Mr. Sharp and then take a vote as to whose are the best. And that’s when things get REALLY strange. Here, by way of an example, is Andy’s first attempt at a rhyming couplet:

’Mr. Sharp is very kind / when you’re making up music he creeps up behind’

…Rapidly followed by this effort from one of the girls, which appears to have taken some inspiration from the dadaist manifesto:

I know what you’re thinking – how can they hope to record this song over the deafening clamour of the alarm bells that are now ringing? What exactly is going on with Mr. Sharp? What’s with all the jumping and bumping? What exactly is ‘Russian scoring’? What could be making these children so giddy? Why is Mr. Sharp creeping up behind them? Where is the nearest responsible adult?

But we’re not finished yet, because things get properly twisted when the moment arrives for them to unveil the final version of the song. With Andy on lead vocals and the others hammering out an effusive see-sawing melody on recorder, glockenspiel, drums and piano, a mere thirty-seven seconds are all this young team require to give several hundred years of western musical tradition and all sense of conventional logic the most almighty smack in the chops. It goes:

‘Mr. Sharp is very nice /
But don’t meet him on a Thursday night /
as it is his killing night!
Everybody loves him so /
but I think he is the best
But he never takes me out /
he is always mucking about.’

‘Well, what did you think?’ pipes up our narrator as soon as the children have downed tools, the chirpiness of his tone suggesting he wasn’t listening too closely and may have missed the line about Mr. Sharp’s weekly ‘Killing Night’. Where on Earth to begin, Alan?! Whitney Houston once sang ‘I believe ‘the children are our future’ and after listening to this performance one must surely agree: like the future, these children are at best confusing and at worst a cause for the gravest of concern.

Our narrator doesn’t see it that way, however – ‘I’m sure their teacher had never had such a splendid gift!’ he enthuses, before going on to encourage you, the listening audience to ‘imagine you are that group of children’ and to ‘make up some music of your own to give as a present to someone you like’. 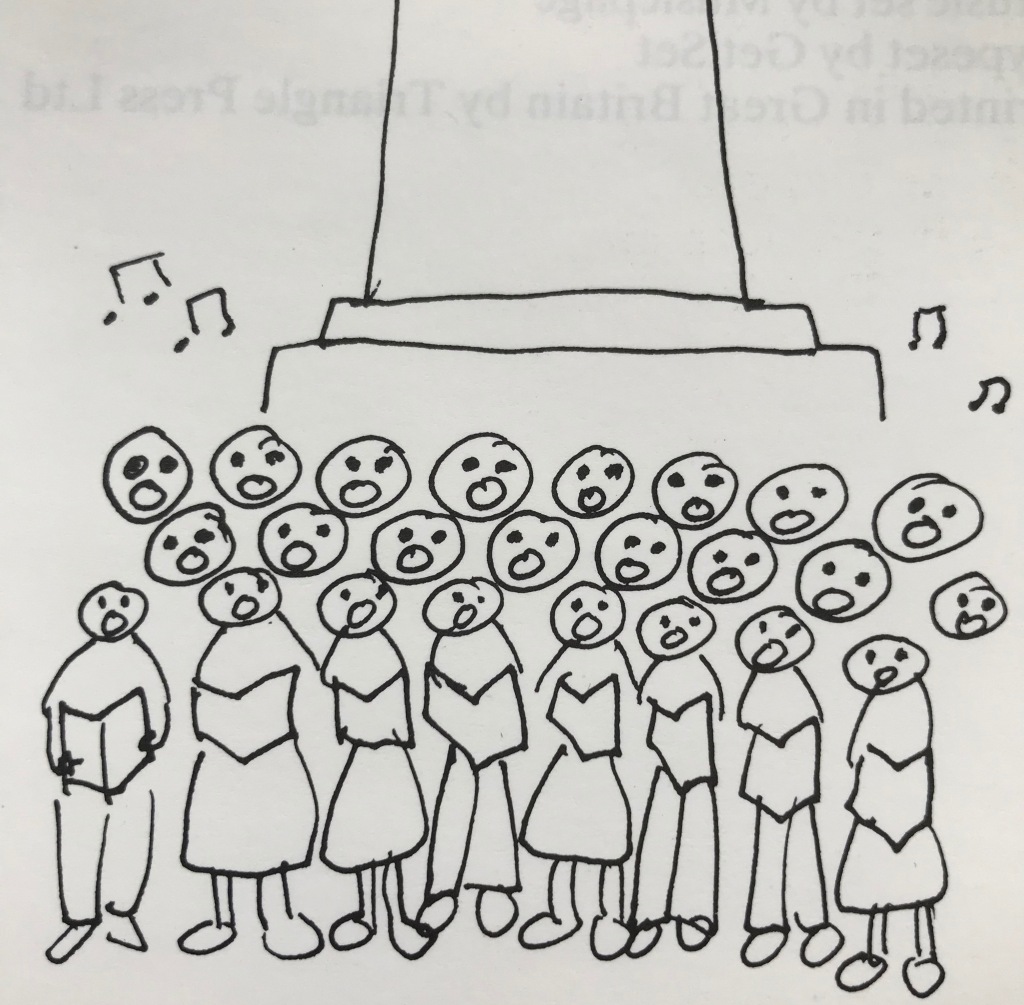 At this point the trail goes cold – we have no further information in the archive that could help in identifying the progeny of tape or any of its participants, so it’s highly likely we’ll never know what Mr. Sharp thought of his strange present or the exact nature of the diabolical horrors he was responsible for all those Thursdays ago. So once again we’re reaching out – not without a little trepidation – to see if anyone can shed some light onto this strange little story.

Did you attend a London Primary School in the early 1980s? Did you know Mr. Sharp? What DID he think of the song? More to the point, what did the social services think of it? Did he match the character portrait sketched out here – that of a man creeping stealthily amongst mountains of notebooks, each one containing increasingly lurid scrawled manifestos, while a scratched-up recording of a New Orleans funeral band tolls ominously in the background? Did he ever take YOU out? Did you live to tell the tale?

And for the rest of you, which person living or dead would YOU most like to write a confusing song about? Perhaps you and some friends could get together and produce a piece of music from your own minds about the UOSH project? Why not send it in? We guarantee it will be archived ‘appropriately’!

View all posts by gpbadmin